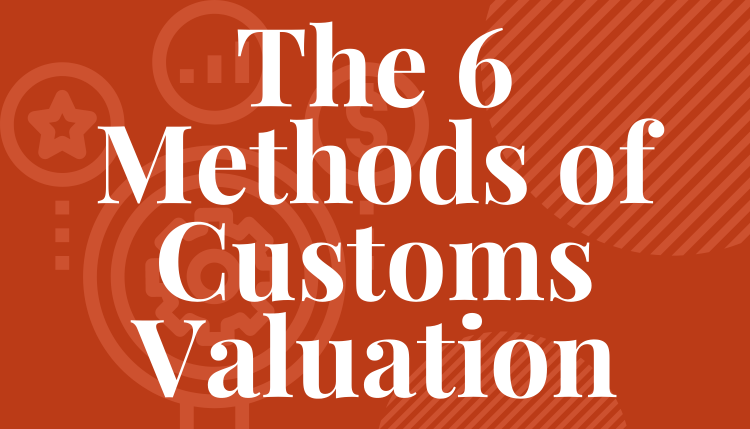 The 6 Methods of Customs Valuation

The 6 Methods of Customs Valuation

Method 5 can be used before method 4 at the request of the importer but not at the discretion of the Customs officer. All World Trade Organization Members are Members of the Customs Valuation Agreement.

Customs valuation is generally based on the actual price of the goods, which is usually shown on the invoice. This price, plus adjustments for certain elements, equals the transaction value. This constitutes the first and most important method of valuation referred to in the Customs Valuation Agreement.

The Customs value equals the transaction value if the following conditions are met:

To utilize transaction value as the valuation method, the price cannot be subject to conditions for which the value for imported goods cannot be determined. These conditions include:

If sufficient information is available, there can be specific adjustments made to the transaction value. This information includes:

If the buyer and seller are related parties, the use of the transaction value is acceptable if the importer demonstrates that:

There have been many cases where Customs has had reasons to doubt the truth or accuracy of declared value. Customs valuation based on the transaction value method is predominantly based on documentation from the importer, and Customs has the right to confirm the truth or accuracy of any documentation. Customs may ask the importer to provide a further explanation for the declared value.

If the reasonable doubt still exists after further information is provided or if there is no response from the importer, Customs may decide that the value cannot be determined using the transaction value method. If Customs decides to use another method for valuation, they must communicate their reasoning to the importer in writing.

The transaction value is calculated in the same manner on identical goods if the goods are:

Some exceptions are accepted:

These exceptions exclude imported goods that incorporate engineering or artwork provided by the importer to the producer of goods at little or no charge.

Transaction value can be calculated using similar goods if:

There may be deductions from the price at the greatest aggregate quantity.

Computed value, the most challenging and rarely used method, determines the Customs value using the cost of production of the goods being valued, plus the profit and general expenses reflected in sales of similarly classified goods.

The computed value is the sum of the following elements:

Under the fall-back method, the Customs value must NOT be based on: