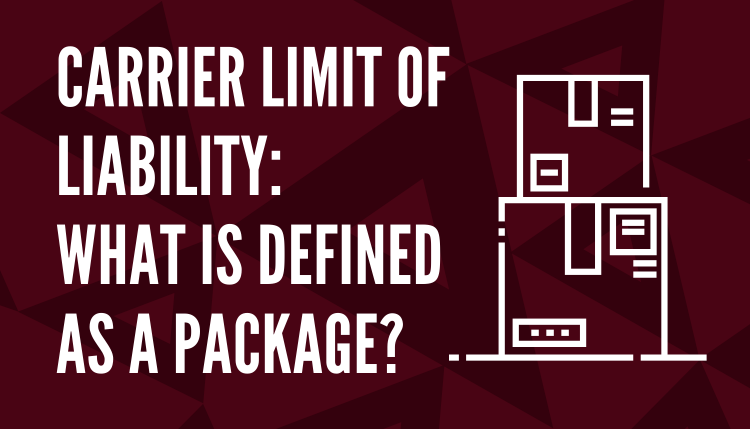 Carrier Limit of Liability: What is Defined as a Package?

Since the Carriage of Goods by Sea Act (COGSA) was implemented, federal courts have struggled to provide a clear and specific definition of a package for the purpose of carrier liability.

The term package is not defined in COGSA, and there is no legislative history to help determine its meaning. Some courts have held that the term should be interpreted according to its plain, ordinary meaning.

There are general standards that most courts appear to apply in determining what is meant by the term “package.” These standards vary according to whether or not the cargo is shipped in a container.

Containers create problems when defining the term package because it is complicated whether a carton inside a container or the container itself constitutes a package. A similar problem arises with the shipment of multiple units on a pallet or other device for the shipment of multiple units. Unless the packaging is specified in the bill of lading, carriers will owe $500 per container.

If parties have incorporated COGSA by contract, some courts have held that the parties can define “package” in any manner they please, even if the effect reduces the carrier’s liability below what COGSA would otherwise allow. Therefore, the parties’ description of the goods can have the most significant weight. Parties to bills of lading should expect to be held to the number that appears under the heading referring to the number of packages.

In Royal Typewriter C. v. M/V Kulmerland, the cargo inside the container consisted of adding machines packed in single corrugated cartons sealed with thin paper tape. Because these cartons could not have withstood a voyage outside of the container, the court held that the container was the package.

When non-containerized cargo is fully boxed or crated, each box or crate will generally constitute a package. This is true regardless of the size and weight of the cargo.

In the case of Robert C. Herd & Co. v. Krawill Machinery Corp, the court treated a fully-crated 19-ton press as a package. Similarly, the court held that a 32-ton steel roll packed in a 48-cubic foot packing case constituted a single package.

In Hanover Insurance Co. v. Shulman Transport Enterprises, Inc, a press weighing over 1,000 pounds, shipped in open view, unboxed, uncrated, and without any shipping skids, was held not to be a package. Freight charges were 91 cents per cubic foot for 594 cubic feet, a total of $540.54. Application of the freight unit rule would have resulted in damages of $297,000.00, which the court found would be an absurd result. The appellate court sustained the trial court’s assessment of carrier liability for actual damage incurred in the amount of $8,346.62.

The Benefits of Cargo Insurance

The uncertainty resulting from the federal courts not providing a consistent definition of a package is avoidable for importers willing to purchase cargo insurance.

To file a cargo insurance claim, importers must only supply proof of value and loss. Claims are typically paid within 30 days, and importers are not required to prove carrier negligence. Therefore, investing in cargo insurance can save importers a lot of time and money.

The Basics of Customs Valuation