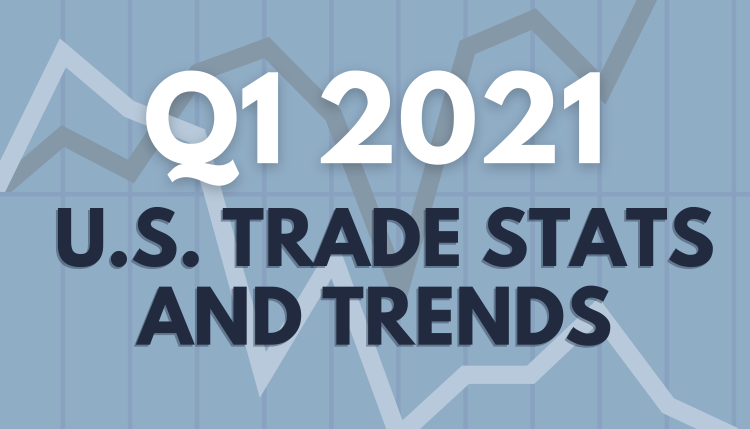 Through the first quarter of 2021, U.S. trade has been making a recovery after collapsing in 2020 due to the COVID-19 pandemic.

The WTO estimates that the volume of world merchandise trade is expected to increase by 8.0% in 2021 after falling 5.3% in 2020, continuing its rebound from the collapse that was lowest in the second quarter of 2020.

Imports increased in Q1 of 2021, rising 5.7%, while exports declined by 1.1%. While trade flows continue to recover after being disrupted early in the pandemic, bottlenecks in the global supply chain are expected to remain a challenge.

The U.S. economy is recovering faster than expected after contracting sharply in 2020. It grew 1.6% in the first quarter of 2021. The economy is still behind the activity level at the end of 2019, the pre-pandemic peak, by about 0.9%. However, we are likely several years away from fully recovering from the deep pandemic recession.

Economic growth in the U.S. is partly due to vaccines being rolled out across the U.S., which has boosted domestic demand and allowed businesses such as restaurants and bars to reopen. It has lifted confidence and helped consumer spending to hit a 14-month high in April.

Based on the robust economic momentum built up in the first quarter of 2021, we could be close to a fully functioning economy in the second quarter. However, the ongoing public health crisis continues to weigh on the economy, and risks to the economic outlook remain.

8 Things to Consider When Choosing a Warehouse