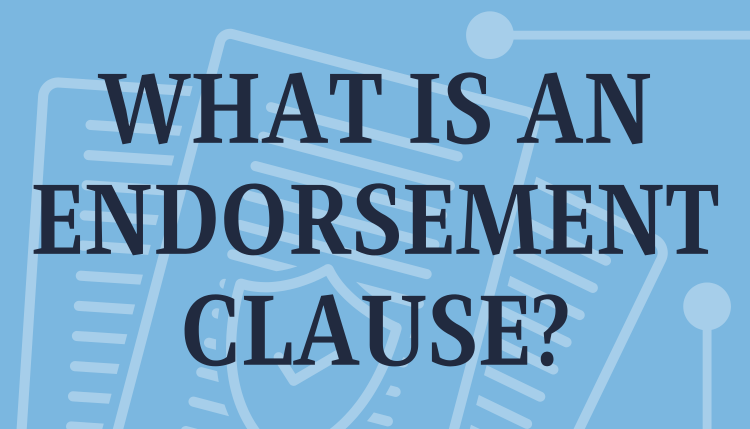 What is an Endorsement Clause?

An insurance endorsement clause, also called a rider, is an amendment attached to an insurance contract that adds, removes, or changes the policy’s coverage.

An endorsement clause can be added when a Marine Cargo Insurance policy is issued, during the policy term, or when the policy is renewed. It can increase or decrease insurance costs, depending on what changes are made to the policy. Endorsements can have their own limits and deductible.

Endorsements generally serve one or more of the following purposes:

Insurance endorsements can be:

Some non-standard endorsements are drafted for a specific policyholder. These are designed to be used on a single policy and address unique situations.

Marine Cargo Insurance is a specialized branch of insurance, so insurance endorsements are specific to the needs of those shipping cargo. The following is an overview of some common policies that include different endorsements for a marine cargo insurance policyholder.

Named Perils
Named perils coverage refers to Institute Cargo Clauses B and C. Clauses B and C include various degrees of narrower coverage that will only cover the loss if caused by specific, named perils such as sinking, stranding, or burning. This means that the insured party chooses any additional perils they would like to add as an endorsement clause when shipping goods. The insurance does not cover any peril not named in this type of policy.

All-Risk Cargo Clause A
All-Risk coverage is an Institute Cargo Clause A, which provides the policyholder with the broadest and most comprehensive coverage available.

Rather than only covering certain situations, all-risk coverage will cover all physical loss or damage unless the cause of loss or damage is expressly excluded from the policy. An all-risk policy will list any exclusions for causes of loss that are not covered, but exclusions can sometimes be removed as an additional endorsement clause.

The following are some standard exclusions for All-Risk Marine Insurance coverage:

There is a possibility that an exclusion can be removed from a policy as an endorsement clause. This means that the endorsement will broaden a policy’s coverage, providing extra protection for the cargo being transported. For example, most marine cargo policies are endorsed to remove the exclusion for war and strikes, riots, and civil commotions.

What is Marine Cargo Insurance?