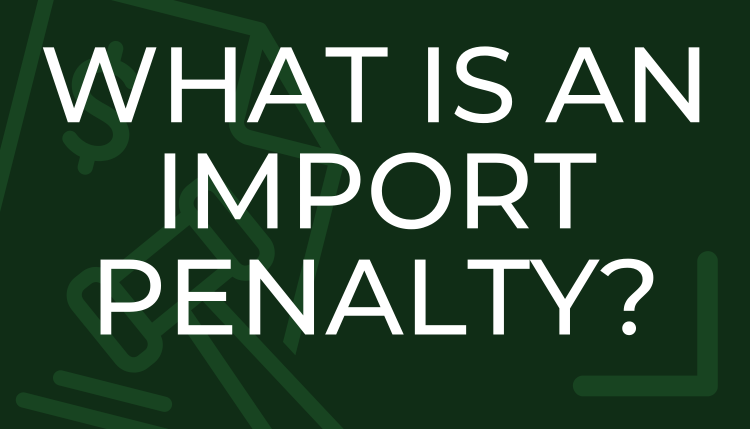 What is an Import Penalty?

Import penalties are fines and legal action applied to importers by U.S. Customs and Border Protection (CBP) when goods are imported into the United States in violation of the law. Import penalties can apply to individuals, companies, and institutions.

CBP’s penalty program targets and penalizes lawbreakers utilizing fines and legal action and was built to discourage non-compliant importers. This program is applied across 326 ports of entry and 42 field offices. Most import penalties are due to inaccurate classification, valuation, country of origin, or goods not invoiced or declared.

A violator receiving an import penalty can be the importer of record, employees, consignees, or other parties involved. There is personal liability for certain types of import penalties.

Under the primary Customs monetary penalty statute, Customs can assess monetary penalties up to the imported merchandise’s domestic value when fraud is alleged. Penalties for non-revenue loss violations can range from 20 to 40 percent of the merchandise value for negligence or gross negligence cases.

How is an Import Penalty Applied?

If an importer misclassified an item and should have used an 8% duty rate but, due to the misclassification, used one with a 0% duty rate, Customs could charge them with gross negligence. The import penalty could be 2.5 – 4 times the 8% duty rate. If it’s a non-revenue violation, the importer could be charged 25-40% of the goods’ value.

When an import penalty is applied to an importer, Customs notes this in their compliance database. This record reflects upon the importer, and as a result, importers may find themselves subjected to more frequent Customs inspections and longer processing times.

Before issuing a penalty, CBP will issue a pre-penalty notice to the importer with a deadline, which is generally 30 days, to justify why they should not receive the penalty. CBP can decide against the penalty, but that is rare.

The recipient of a penalty notice has 60 days to file a petition for relief, making the argument as to why CBP should not impose the penalty. The failure to pay an import penalty can result in a collection action being initiated by the Court of International Trade.

There are instances where importers have kept themselves relatively updated on Customs regulations and still have been accused of non-compliance. It is best practice to continually review the trade processes in place regularly or use a Customs broker.

Penalties for Violations of Other Regulations

In addition to CBP penalties, there are other types of government regulations that importers must comply with. When CBP discovers a violation of these laws, there may or may not be a referral for a criminal prosecution, and CBP has the option of assessing a personal penalty against the violator.

What is Warehouse Insurance Coverage?

Why is it Difficult to Get Warehouse Coverage?