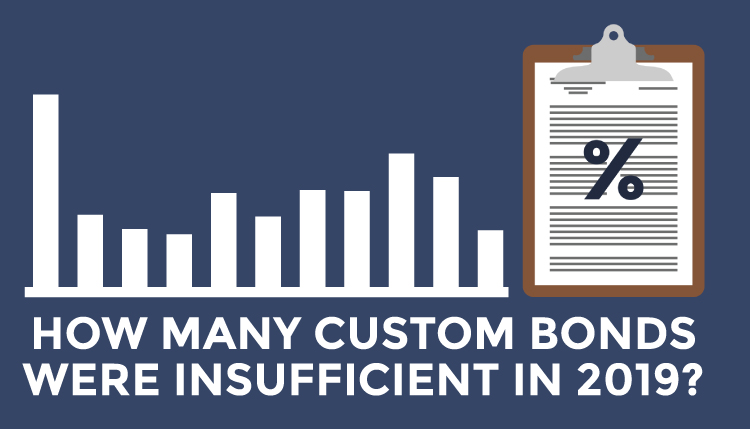 Number of Insufficient Customs Bonds in 2019

TRG receives notices for insufficient Customs Bonds on the first week of every month for every bond we provide. So what did 2019 look like?

Since Trade Risk Guaranty specializes in providing U.S. Customs Bonds directly to United States importers, we are in the unique position of having a vested interest in the sufficiency of the bonds we have on file. When an importer’s bond is deemed insufficient by U.S Customs and Border Protection, a written notice is sent directly to the principal on the bond (typically the importer) and to the surety that is backing the bond. This written notice is known as an insufficiency letter.

Since TRG provides U.S. Customs Bonds directly to over 10,000 businesses, we receive direct notice from CBP when an insufficiency letter has been sent to one of our importers. This allows us to help each importer that is approaching insufficiency through the process of placing a new bond and maintaining compliance with CBP.

In the following chart, we can see the number of insufficiency letters TRG received for importers in 2019. Keep in mind that this chart does not include importers that acted to increase their bond size preemptively as a result of TRG’s Bond Sufficiency reporting. 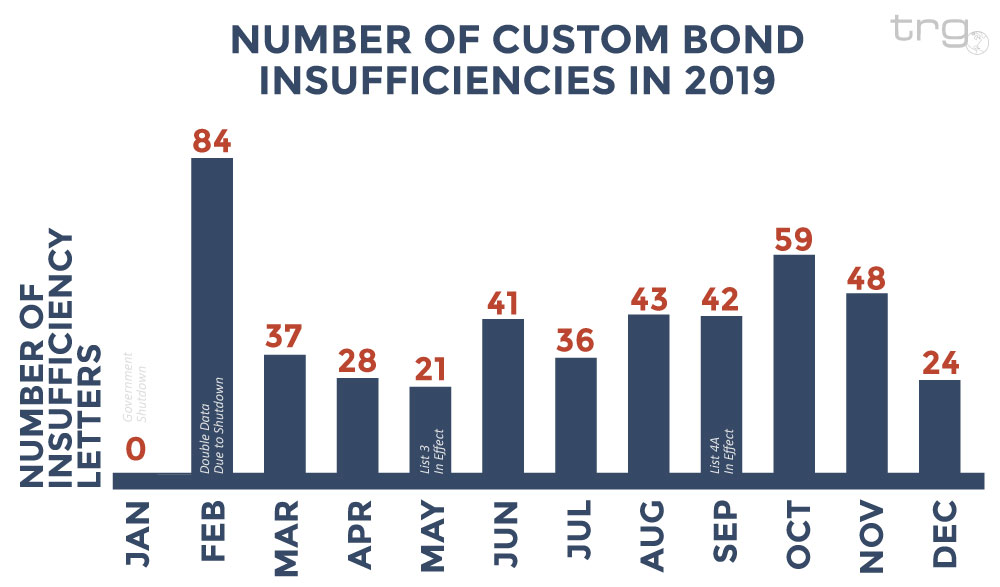 Looking over the data, it becomes apparent how much the tariffs on Chinese goods have impacted the bond sufficiencies of many businesses within the United States. There are distinct spikes in the number of insufficiency letters sent out following the implementation of a new list of commodities subject to Section 301 tariffs.

In May 2019, the additional tariff on goods included on list 3 increased to 25% and there was an increase in the amount of insufficient Customs Bonds in the following months of June through September 2019. Then before those numbers could begin decreasing, List 4A went into effect in September 2019. Following that, there was another distinct increase in the number of insufficient Customs Bonds in the months following.

In order to remain compliant with U.S. Customs and Border Protection, a business must ensure that a sufficient bond is in place for its imports into the United States. When a bond on file is deemed insufficient, no goods will be cleared under that bond and any shipments that come in will be stopped at the port until a sufficient bond is placed. Therefore, monitoring your bond sufficiency in real-time can help a business be proactive and informed.

Although you are able to monitor your Bond Sufficiency by manually tracking the duties, taxes, and fees you paid on every entry in the past 365 days, it is much more accurate to be able to access your import data directly from CBP. That will allow you to keep a direct eye on the values CBP has on file for your entries.

At Trade Risk Guaranty we receive data directly from Customs on every bond that we hold. Not only does this allow us to provide claims monitoring and assistance but it also allows us to provide a comprehensive bond sufficiency report. TRG’s Bond Sufficiency Report calculates the percentage of the bond capacity an importer has currently utilized. This report has helped importers monitor their bond sufficiency in real-time and properly prepare for an increase when necessary.

Want to access your Bond Sufficiency Report from TRG? Use the appropriate link below to gain access to your report!

TRG in Quarantine – Working from Home During COVID-19

TRG in Quarantine – Onboarding During COVID-19