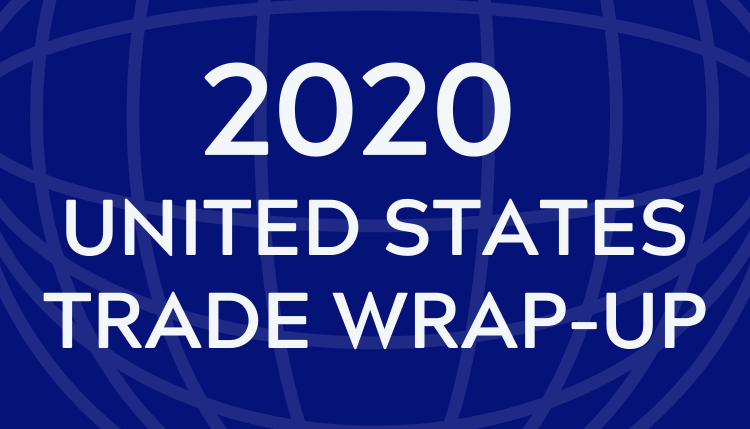 As we enter into 2021, it is essential to look back and reflect upon the events that occurred in the international trade industry through the year 2020.

The trade agreement between the U.S. and Japan (USJTA) was implemented on January 1, 2020. As a part of this agreement, Japan committed to providing substantial market access for the United States by phasing out many tariffs, enacting tariff reductions, and allowing a specific quantity of imports at a lower duty. When USJTA is fully implemented, nearly 90% of U.S. food and agricultural products imported into Japan will be duty-free or receive preferential tariffs.

The United States and China signed an agreement on a Phase One trade deal on January 15, 2020. The agreement requires reforms and other changes to China’s economic and trade regime. The Phase One trade agreement addresses certain acts, policies, and practices of China identified in the Section 301 investigation related to technology transfer, intellectual property, and innovation.

Lastly, from now on, the European Union will exclude the United Kingdom, which exited the E.U. on January 31, 2020. There was a transition period that extended to December 31, 2020.

The U.S. trade deficit decreased in February as imports declined more than exports. This happened just before the blow to global commerce from the COVID-19 pandemic.

On February 14, 2020, the Phase One Trade Agreement between the U.S. and China went into effect. China agreed to expand purchases of certain U.S. goods and services by $200 billion over 2020 and 2021.

The U.S. declared a national emergency on March 13, 2020. This led to the shutdown of many businesses and widespread economic hardship. The U.S. trade deficit widened in March as COVID-19 canceled international flights, froze global tourism, and caused massive disruptions in the exchange of goods. Imports fell 6.2%, but U.S. exports tumbled 9.6%.

On April 7, 2020, FEMA enacted a temporary rule banning the exportation of five types of Personal Protective Equipment from the United States without its explicit approval due to the demand for PPE during the COVID-19 pandemic.

On April 19, 2020, an executive order temporarily extended deadlines for estimated duties, taxes, and fees for 90 days to provide relief for importers suffering significant financial hardship resulting from COVID-19. The 90-day Duty Deferral is a result of the national emergency proclamation on March 13. This temporary postponement applied to entries made from March 1 to April 30, 2020, and didn’t permit the return of any deposits of estimated duties, taxes, and fees that have been paid.

U.S. trade activity plummeted in May as COVID-19 lockdowns continued to freeze shipping activity and consumer demand. The COVID-19 outbreak continued to take a toll on world commerce. Exports of crude oil, petroleum products, and auto imports dropped sharply in May.

Also, China announced new tariff exemptions for 79 U.S. products, including rare earth metals and gold and silver ores, which will go into effect on May 19 and last for a year. This was in addition to the 696 exemptions China announced in February.

U.S. Customs and Border Protection has seized a large number of counterfeit and unapproved COVID-19 products. As of June 1, CBP had seized more than:

CBP continues to identify and seize a large number of counterfeit or unapproved COVID-19 products that threaten health and safety.

Over the last couple of years, the U.S. government has been working with Canada and Mexico to revamp the North American Free Trade Agreement (NAFTA). On July 1, 2020, the United States-Mexico-Canada Agreement (USMCA) replaced the North American Free Trade Agreement. USMCA includes altered rules of origin, updated obligations for declaring preferential tariff treatment, and other alterations.

On August 5, 2020, the FDA issued an emergency use authorization (EUA) for specific single-use surgical masks in response to surgical mask shortages resulting from the COVID-19 pandemic. The EUA authorized the emergency use of surgical masks that meet specific performance requirements for use in healthcare settings to provide protection from exposure to COVID-19.

After USMCA was implemented, it was announced that particular aluminum articles imported from Canada became subject to an additional 10 percent rate of duty, effective August 16, 2020.

On August 21, 2020, the U.S. and E.U. announced an agreement to reduce tariffs on some European imports to the U.S. and remove barriers to American lobster exports.

In a court filing on September 10, a group of vinyl tiling companies filed a lawsuit against the Office of The United States Trade Representative (USTR) regarding Section 301 List 3 Tariffs. It was alleged that the USTR imposed Section 301 List 3 Tariffs inappropriately beyond the statute of limitations. This was the first challenge of its kind filed against the administration’s use of Section 301 Tariffs in the ongoing trade war between the United States and China.

On September 15, 2020, the WTO released a report stating that the U.S. violated international trade laws when it imposed 7.5% and 25% tariffs on Chinese goods in 2018.

On October 6, the United States raised tariffs on aluminum against 18 countries after it was determined that the goods were being dumped. The U.S. International Trade Commission will make the final determination in February 2021.

On October 13, the World Trade Organization announced the E.U. would be able to impose tariffs on up to $4 billion worth of U.S. goods in response to its case regarding subsidies provided to Boeing.

On November 9, The E.U. announced that it would begin imposing tariffs on around $4 billion of American aircraft, food, drinks, and other products. The World Trade Organization cleared this action on October 13 after it said Europe could retaliate against the U.S. for years of illegal subsidies given to Boeing.

On November 10, CBP and Singapore Customs signed a letter of intent to enable closer cooperation in trade facilitation, revenue protection, and risk management. The Letter formalizes the United States’ and Singapore’s commitment to sharing trade data and exploring the possible connection of the two countries’ national Single Windows for trade facilitation.

On December 29, 2020, the Office of the USTR announced extensions to existing exclusions and granted new exclusions on roughly 100 Chinese imported items through March 31, 2021.

On December 31, 2020, the United Kingdom’s transition period to withdraw from the European Union officially came to an end. A new trade agreement between the U.K. and E.U. retains their tariff-free status. The E.U.-U.K. Trade and Cooperation Agreement was signed on December 30 and allows zero tariffs and quotas on goods that comply with the appropriate rules of origin.

Why is it Difficult to Get Warehouse Coverage?