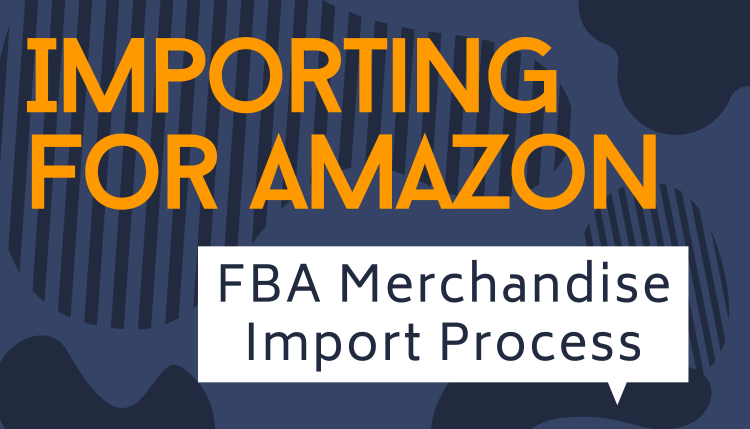 Before selling merchandise on Amazon, FBA importers need to understand their obligations in the import process.

Those selling products sourced from other countries are commercial importers and should abide by import laws set up by the U.S. Customs and Border Protection (CBP). It is the FBA seller’s responsibility to ensure the imported goods comply with U.S. laws and regulations.

Basics of Importing into the U.S.

CBP is responsible for the security, compliance, and facilitation of international travel and trade. Sellers importing FBA merchandise into the United States must comply with the following steps to ensure that shipments arrive safely and legally without resulting in CBP storage fees or damages.

Roles Involved when Importing into the United States

Before FBA importers ship inventory to an Amazon fulfillment center in the U.S., they need to decide who will take on specific responsibilities:

Arranging Shipments with a Customs Broker

Many FBA importers will decide to use a licensed Customs Broker to clear goods through Customs and ensure all documentation is filed correctly. Brokers are regulated by U.S. Customs and Border Protection and are authorized to assist importers in meeting the Federal requirements.

FBA merchandise importers who desire the services of a Customs broker or a freight forwarder to help move inventory from one country to another are responsible for engaging them directly. A Customs broker may require you to complete the following forms:

To enter and clear goods with CBP, the importer of record needs the legal right to make the necessary filings; this is also known as having ‘The Right to Make Entry’. The importer of record can be the owner or the purchaser of the FBA merchandise, or a licensed Customs Broker with Power of Attorney.

Customs Brokers are the only entities authorized by United Stated tariff laws to act as agents of the importer during the transaction of their business with Customs.

When an entry of imported goods is created, a CBP power of attorney (POA) must be made in the name of a Customs broker, a staff member, or a different third-party to complete your transactions with Customs. That party is then authorized to act as your agent to get your FBA inventory moved through the Customs process.

A POA will be required in most cases to establish the right to make entry. A POA can only be granted to a United States resident and must be issued directly from the person or firm.

If CBP finds an importer in violation of the conditions of their Customs bond and sends notice of liquidated damages, steps can be taken to mitigate the claim and reduce the fine paid to Customs.

Importers entering goods into the United States must file a summary document with Customs for each entry. This document is known as an Entry Summary, and it used to determine information about the imported commodity. The data contained in the entry summary determines the estimated duty rate for that commodity at the time of entry.

A little less than a year after this date, the final duty amount for the entry will be determined during liquidation. At this point, Customs will determine if a higher duty rate should have been paid for the goods at the time of entry. If so, a supplemental duty bill is issued. Amazon will not cover supplemental duties.

Once a shipment arrives in the United States, importers must declare how goods will be entered. There are a variety of ways to enter goods for formal entry into United States commerce. It is essential to know your options and the pros and cons of each type of entry.

Imports over $2,500 need to be formally entered through Customs and Border Protection and need to be accompanied by a Customs bond. Imports for commercial selling purposes on Amazon also require an entry summary, bill of lading, and commercial invoice or bill of sale. HTSUS classifications of the goods and all completed customs forms must be provided as well.

If you want more useful tips on importing FBA merchandise, here are 10 Things to Know While Importing FBA Products Into the U.S.

What Does it Mean to Insure Shipment-By-Shipment?

Carrier Limit of Liability: What is Defined as a Package?